At a recent rare coin auction in Las Vegas a coin described as having “pretty funkadelic toning on both sides, reminiscent of a Grateful Dead T-shirt” sold for double its pre-sale estimate.

The coin in question is this beautifully toned 1964-D Kennedy half dollar graded Mint State 68 by Professional Coin Grading Service.

It’s the top-graded example of this date and this was the first time the coin appeared at auction.

Toning is a term that describes the discolouration that forms on the surface of a coin due to oxygen and chemicals in the air acting on the metal. It affects different coins in different ways, dependent upon the make-up of the metal.

It is a natural, slow process that can take months or even years to appear.

Interestingly, coin toning can hugely increase or decrease the value of coins. Probably because it can be quite beautiful or horrendously ugly! 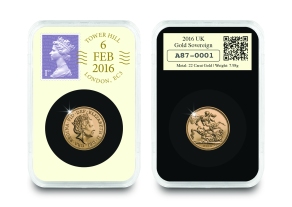 Own a unique Gold Sovereign issue that just 995 people world-wide will ever own – the “Long to Reign Over Us” DateStamp™ Gold Sovereign.

It has been exclusively released in 2016 to recognise what is currently the most important period of the Queen’s life.

Click here to find out more and secure one for your Portfolio before they sell-out.