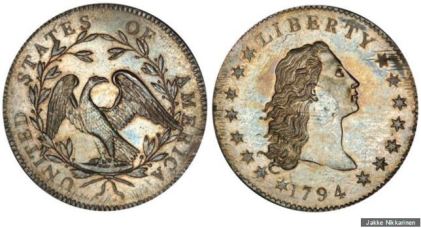 The most valuable coin in the world has gone on display in London. It last sold in 2013 for $10m, but how does a coin get the same price tag as a small island, especially when the scrap value of the coin is a measly $12 for its silver content?

It ticks all of the boxes for what to look for when buying a classic coin – rarity, condition and cultural value, but there’s one key selling point that sets this coin apart.

It is believed to be the first dollar ever to be struck.

If it is the first ever dollar, it would mean President George Washington himself would have personally inspected it.

At the very worst, it is one of 1,758 struck on 15 October 1794 at the fledgling Philadelphia Mint. Only about 130 of which survive today and this is highest quality example known.

How much will it sell for next time?

It’s impossible to know what this coin is worth today, but one thing is for sure – the price has only been going one way for last 70 years:

Something special is about to be released to UK collectors…

250 of these incredible solid bronze medals have been authorised in honour of the Queen’s 90th and Prince Phillip’s 95th birthdays.

It’s a restrike of the legendary 1957 Royal Visit Medal issued by Monnaie de Paris (the French equivalent of The Royal Mint).

I have secured 50 of the 250 edition limit for Coin Portfolio Management clients.