The story of a brand new error coin coming out of The Royal Canadian Mint last month reminded me of a strange coin error that went to auction back in January with an estimate of $10,000. It sold for over four times that.

An impressive result. Even more impressive when you consider the “coin” in question was actually struck onto a standard nail… 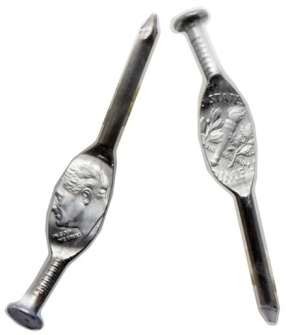 The Roosevelt Dime, which is undated, was minted directly onto a zinc nail.

Reportedly a one-in-a-million-chance accident, although many argue that it must have been done deliberately by a worker at The US Mint, the nail actually made it into general circulation, escaping through normal distribution channels.

It created one of the strangest coin errors and one of the most sought after too. Estimated to sell for around $10,000 at the auction in January, it actually achieved a hammer price of $42,300 (almost £30,000).

Amazingly, it is not unique, with around 6 similar errors known to exist. A few examples of cents struck on nails were discovered in the 1970s.

You can own an error coin that shouldn’t exist

It wasn’t minted on a nail, but the 2014 UK Year of the Horse 1oz Silver from The Royal Mint is a coin that shouldn’t exist.

A small number of The Royal Mint’s Year of the Horse coins were struck with the wrong obverse design, with the denticle design around the edge, normally seen on Britannia coins. Before the error was picked up by the Mint, they entered general circulation.

It has taken 2 years to get them, but we have a small stock available for Coin Portfolio Management clients now. You’ll have to be quick though.