The Bank of England has announced an update to the £20 bank note, with a new design scheduled for 2020.

For the first time ever, the general public has had a big hand in the selection of the character to appear on the reverse. But who did they pick? 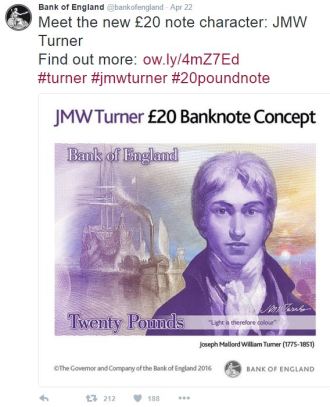 A self-portrait of Joseph Mallord William Turner, one of the great masters of painting, will adorn the new £20 note, replacing famous economist and philosopher Adam Smith who has been on the £20 note’s reverse since 2007.

Included with Turner’s self-portrait will be The Fighting Temeraire, which was painted by Turner in 1839 and currently on display in the National Gallery.

Turner’s selection represents the first time the Bank of England has used the more open selection process. The general public had a two month period last summer during which people could suggest a figure from the visual arts.

Once the nominations were in, an appointed committee, with input from public focus groups, produced a shortlist and left the final decision to the governor of the Bank of England.

It’s not just the design that is changing, with news that the note itself will be printed on polymer substrate.

Polymer banknotes are said to be cleaner, more secure and more durable than their paper counterparts. You won’t have to wait until 2020 to see your first polymer UK banknote though, with the new polymer £5 note entering circulation this September. 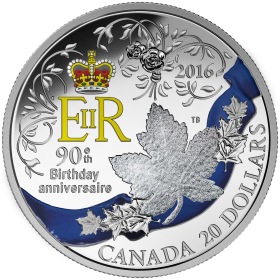 A piece of art Turner would be proud of?

Coins are miniature pieces of art and I have not seen one as beautiful for quite some time as the new silver proof coin from Canada celebrating Her Majesty’s 90th birthday.

It’s a coin that sold out at the mint on its first day of release, but not before I secured 350 for Coin Portfolio Management. I have 90 left. My contact at The Royal Canadian Mint just told me that they’re now selling at 20% over their original price in Canada.

Get yours at our original price by clicking here