A new world record has just been set in London for the price paid for a copper or bronze coin at auction. The coin in question is a rare 1933 penny – one of only four in existence. 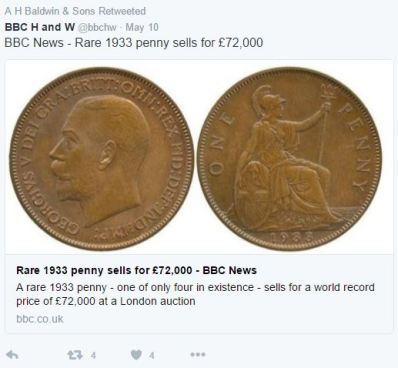 Who knows, if you keep a “copper jar” full of low value coins, you might just be sitting on a goldmine…

Admittedly, you’re unlikely to find a version of the record-breaking coin because only four are known to exist and the other three are already accounted for.

The coin sold is known as a “Pattern” version – presented as a prototype, but never actually put in to production.

This was the first time that any of the four known Pattern coins have come up for auction, with two in private collections and the other in The Royal Mint Museum.

Bidding ultimately came down to two eager buyers. They fought it out for over minutes of bidding until the hammer came down with the price at £72,000 – nearly double the presale estimate.

1933 Pennies are extremely rare in their own right. The Royal Mint produced a surplus of 1p coins in 1932, meaning none were produced for circulation the following year.

Only seven pennies were made bearing the 1933 date for ceremonial and record purposes only.

I’ve secured just 8 of these 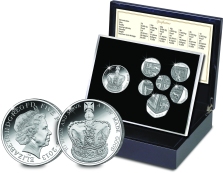 The set you see on the right is not as rare as a 1933 Penny, but it is sold out at The Royal Mint and I have just 8 available on a first-come, first served basis.

It’s the official collection of United Kingdom coins issued to celebrate the Coronation Jubilee of Queen Elizabeth II in 2013.

Centrepiece of the presentation is the official 2013 UK Coronation Jubilee £5 Coin, which sold out its 15,000 edition limit at The Royal Mint.