Indian Overseas Bank has started offering Indian investors the chance to own an Indian-produced gold coin for the first time.

Before then, Indians wanting to invest in gold had to make do with jewellery after the Reserve Bank of India barred banks and post offices from selling gold coins.

The Indian gold coin, minted in India and sold by select banks, is struck from 24 Carat Gold and is available in 5, 10 and 20 gram varieties.

The coins feature the national emblem of Ashok Chakra engraved on one side and the face of Mahatma Gandhi on the other and India hopes it will join the list of globally recognised iconic coins like the American Eagle, the Chinese Panda and the Canadian Maple Leaf to name but a few.

A third of the gold demand in India (200-250 tonnes a year) comes from investors who buy coins or bars of gold, so this new coin should see strong demand.

Own a Sovereign struck in Bombay for ONE YEAR ONLY 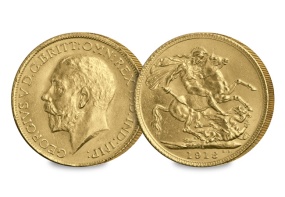 Almost 100 years old, this Gold Sovereign was struck in India during the reign of King George V.

The Sovereign was only struck in India during one year – 1918. That has resulted in less than 1% of all George V Sovereigns being struck out of Bombay.

That makes this Sovereign a defining coin; one that will be in demand now and in years to come.

3 thoughts on “India launches its very own gold coin”