Although the Sovereign is Great Britain’s best-loved coin, few people realise that not all of them were struck in this country.

2016 is the 200th anniversary of the Great Recoinage Act 1816, which resulted in the introduction of the modern Sovereign in 1817, replacing the Guinea.

The gold Sovereign reached the height of its prominence and prestige under the reign of Queen Victoria as the British Empire expanded.

It became the “chief coin of the world” – a title bestowed upon it by British economic historian Sir John Clapham due to it being legal tender in 36 colonies and dependencies in the 1860s and was widely used in countries with no allegiance to the British crown.

In an era when the British Empire ruled supreme, Sovereigns were not only produced in Great Britain, but throughout her dominions. The first Sovereign to be struck outside of Britain came out of Sydney in 1871.

Between 1871 and 1932, Sovereign production was spread over five continents – Europe, North America, Australia, Africa and Asia, with branches of the Royal Mint in London, Ottawa, Sydney, Melbourne, Perth, Pretoria and Bombay.

In order for The Royal Mint to distinguish the Sovereigns minted at the branch mints, they used a variety of mint marks. These were either a letter or a combination of letters to denote its branch of origin.

As a rule, mint marks can be found on the reverse of the coin, just above the inner two numbers of the date.

Here is the story of each of the overseas territories that produced Sovereigns:

Gold had been discovered in New South Wales in 1851 and in Victoria shortly afterwards. As a result three branch mints of the Royal Mint were opened; Sydney, Melbourne and Perth. To identify which branch the coins was struck at, mint marks carried the initial of the city of manufacture.

South Africa was still recovering from the Boer War when the only African Sovereign – identified by the letters “SA”- was struck in Pretoria. For reasons unknown, Sovereigns struck in Pretoria, Bombay and Ottawa carried the initials of their country of manufacture as opposed to their city. In the case of Pretoria it can be easily understood as “P” was already in use by Perth.

North America had experienced its first gold rushes earlier than Australia but a branch mint did not open in Canada until 1908. The North American struck Sovereign is marked with a “C” signifying its Canadian origin. The Canadian Sovereign almost certainly contains gold from the Yukon.

The Asian Sovereign, is in many ways, the most unusual. The “I” means that it was minted in India, the jewel in the Empire’s dazzling crown. Sovereigns were only produced there during one year – 1918, which makes them particularly scarce, and a special target for discerning collectors. 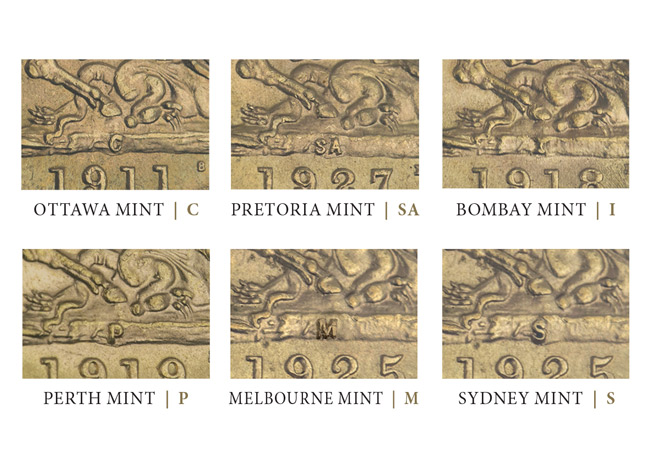 You can own the one-year-only Bombay Sovereign

Almost 100 years old, this Gold Sovereign was struck in India during the reign of King George V.

The Sovereign was only struck in India during one year – 1918. That has resulted in less than 1% of all George V Sovereigns being struck out of Bombay.

That makes this Sovereign a defining coin; one that will be in demand now and in years to come.