Following the announcement from the Palace back in May confirming his retirement, brand new coins have been announced to honour his record-breaking 70 years of service to the Crown.

The news has been met with excitement from collectors because Prince Philip coins are amongst the rarest and hardest to find.

Back in 2011 a UK £5 coin was issued by The Royal Mint in celebration of Prince Philip’s 90th birthday.

The coin’s design featured a specially commissioned portrait of The Duke of Edinburgh by Mark Richards FRBS. Just 18,730 of these coins were struck in Brilliant Uncirculated presentation packs making it one of the rarest £5 coins ever.

The rarest of them all was the Gold Proof £5. Just 636 coins were struck.

And because of this, these coins are extremely sought after by collectors and are almost impossible to get hold of on the secondary market.

As you probably already know, coins with a lower mintage are often the most sought-after by collectors in years to come. 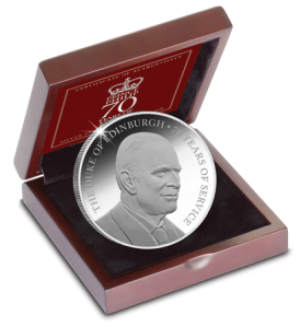 Limited to just 995 coins, this looks a sure-fire sell-out.

I have secured a small number for Coin Portfolio Management clients, but please be quick. You can pre-order yours today for just £85.