I always think about my grandfather around Easter time and a particular set of unusual classic coins that are intrinsically linked to the holiday.

My grandfather was a keen collector and loved showing me his coins, but one piece always sticks in my memory.

When he first showed me the outside of the case, I thought I was about to see some very old glasses or a perhaps some remarkably intricate fishing flies.

There was no mistaking that, whatever was inside the case, it was very, very old.

My grandfather wasn’t one for a quick reveal, so he told me to picture a different world – one occupied by Oliver Twist and Ebeneezer Scrooge. A world without TV, computers, central heating, air travel or even cars.

I pictured Scrooge counting his pennies, families gathered around an open fire, the dark and dirty streets of London. In short, I pictured Victorian times.

Then my grandfather opened the case…

I saw a set of coins that I had never seen before. They certainly didn’t look like the coins I was used to getting in my pocket money and they didn’t even look like the older coins my grandfather had shown me previously, but they were obviously British.

“These coins are some of the rarest Queen Victoria coins you will ever see”, he told me.

“It’s called Maundy Money and these coins come from a ceremony that sees the Queen personally hand out coins to a tiny number of chosen recipients.

But the demand for them was so strong in the 1800s that the bank started issuing replica sets in small numbers – even Queen Victoria herself requested pieces for her private use.”

My grandfather loved these coins. They were his pride and joy. When I inherited them, it didn’t take me long to fall in love with them either.

I did a bit of research on Victorian Maundy Money and realised I had something special.

Maundy coins are amongst the rarest Victorian coins you can find because:

In short, they are everything a “Classic” coin should be.

I knew the day my grandfather showed me these coins, just as I know now in my professional capacity as Managing Consultant at CPM, that they are coins to keep and treasure. 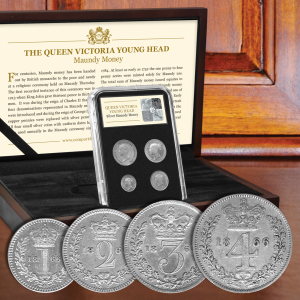 Today, you have the chance of adding a complete set of Queen Victoria Young Head Maundy Money to your collection.

As with all of our “Classic” coins, I have sealed them in tamper-proof capsules and placed them in a wooden presentation case to ensure their quality remains unblemished for years to come.