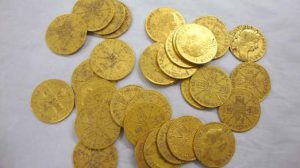 Undated handout issued by the South Tipperary Museum in Clonmel of some of the gold coins found underneath floorboards in a pub in Carrick-on-Sui by builders. PRESS ASSOCIATION Photo. Issue date: Tuesday January 29, 2013. Builders carrying out stabilisation work on an old pub building have unearthed one of the most significant finds of gold coins ever recorded in Ireland. Eighty-one coins, mostly guineas and half guineas dating back to the 17th century, were dug up from clay underneath floorboards in a fire-damaged premises on Main Street, Carrick-on-Suir, Co Tipperary. See PA story IRISH Guineas. Photo credit should read: South Tipperary Museum/PA Wire

NOTE TO EDITORS: This handout photo may only be used in for editorial reporting purposes for the contemporaneous illustration of events, things or the people in the image or facts mentioned in the caption. Reuse of the picture may require further permission from the copyright holder.