Royal Jubilees are big business. Whether it’s with street parties or commemorative coins, the nation (and beyond) always marks them in quite some style.

Thanks to Her Majesty’s record-breaking reign, we have been treated to a larger number of Jubilees than one might expect, with each one more remarkable than the last.

Her next Jubilee – her Platinum Jubilee – is on 6 February 2022, marking an incredible 70 years on the throne.

What can we expect? Let’s take a look back before we look forward to this once-in-a-lifetime event.

The Jubilees of Queen Elizabeth II

Marking the 25th anniversary of Queen Elizabeth II’s accession to the throne, 1977 saw church services commemorating the actual anniversary date in February and elaborate street parties on the official “Jubilee Days” in June throughout the UK and Commonwealth.

The main celebration took place in London on 7 June 1977. The Queen led a procession through the streets of London, with an estimated one million people lining the pavements to greet her. A further 500 million around the globe were watching on television.

The Royal Mint produced a commemorative crown to mark the occasion, with the obverse being reminiscent of the 1953 Coronation crown by featuring an equestrian portrait of the Queen in Guards uniform.

The reverse is unusual in having no inscription of any kind, let alone the value of the coin. The eagle-shaped vessel known as the Ampulla and the ceremonial spoon used to anoint the sovereign at the coronation appear in a central circle, surmounted by the Crown of St Edward and the heraldic flowers of the United Kingdom.

Just over 37 million were minted.

1992 marked the 40th anniversary of Queen Elizabeth II’s accession to the throne and, compared to her Silver Jubilee 15 years earlier, was a low-key event.

No UK coins were issued specifically for the Ruby Jubilee.

The Golden Jubilee of Elizabeth II was held in 2002 to mark the 50th anniversary of the accession of Queen Elizabeth II. It was a huge international celebration and it created one of the most collectable Sovereigns in living memory.

Celebrations took place between May and July in the form of parades and street parties. A special “Prom at the Palace” took place in the gardens of Buckingham Palace. 2 million people applied for tickets. 12,500 lucky applicants were selected and enjoyed an evening of classical music in what was the biggest event ever held at the Palace.

Another highlight was the flypast over Buckingham Palace, which was watched by the Royal Family from the balcony of the Centre Room and culminated with Concorde and the Red Arrows flying over.

The Royal Mint issued a very special, one-year-only Sovereign for the Jubilee, changing the regular St George and the Dragon design to a Royal Arms design. 12,500 were issued, but it wasn’t enough. Today, it’s a coin that you simply can’t find and prices have more than doubled.

Just the second Diamond Jubilee in British history took place in 2012 and it was another large-scale event. Again, commemorative events were held throughout the UK and Commonwealth, the Queen and the Duke of Edinburgh touring the United Kingdom and other members of the royal family touring the rest of the Commonwealth.

Like in 2002, multiple events and tributes were held over the year and throughout the Commonwealth, with many events were staged in London during an extended bank holiday weekend in June. The River Thames Diamond Jubilee Pageant saw a maritime parade of 1,000 boats from around the Commonwealth, which was the largest flotilla seen on the river in 350 years.

The weekend of celebrations ended with the Royal Family making a balcony appearance at Buckingham Palace to watch a flypast by the Red Arrows and historic aircraft, including the last flying Lancaster bomber in Britain.

Just like in 2002, The Royal Mint issued a Sovereign with a one-year-only design, but this time they limited it to just 5,500.

That tight edition limit, combined with special design of St George slaying the dragon have created probably the most collectable modern Sovereign.

Our selling price for this coin has gone up FIVEFOLD in just 10 years and we just can’t find these coins on the secondary market.

Gold and Silver coins were issued and the whole range sold out. The Silver £5 coin was limited to 8,000, but sold out on launch day.

It featured an exclusive design of the Imperial State Crown and Her Majesty’s pledge – “My whole life, whether it be long or short, devoted to your service”.

Scheduled to be celebrated in June 2022, the Platinum Jubilee should be on the same scale as the Golden and Diamond Jubilees.

A special 4-day weekend has already been announced from Thursday 2 June to Sunday 5 June and we know that The Royal Mint is planning to launch the very first royal 50p for the event.

It will be a monumental collecting event, so the advice is simple – get ahead of the crowd because history suggests that the coins will not be around for long.

The good news is, if you’re quick, you can still get your hands one of the few Platinum Jubilee commemoratives still available, but I wouldn’t be surprised to see these sell out soon. You’ll have to act fast to secure them for your collection. 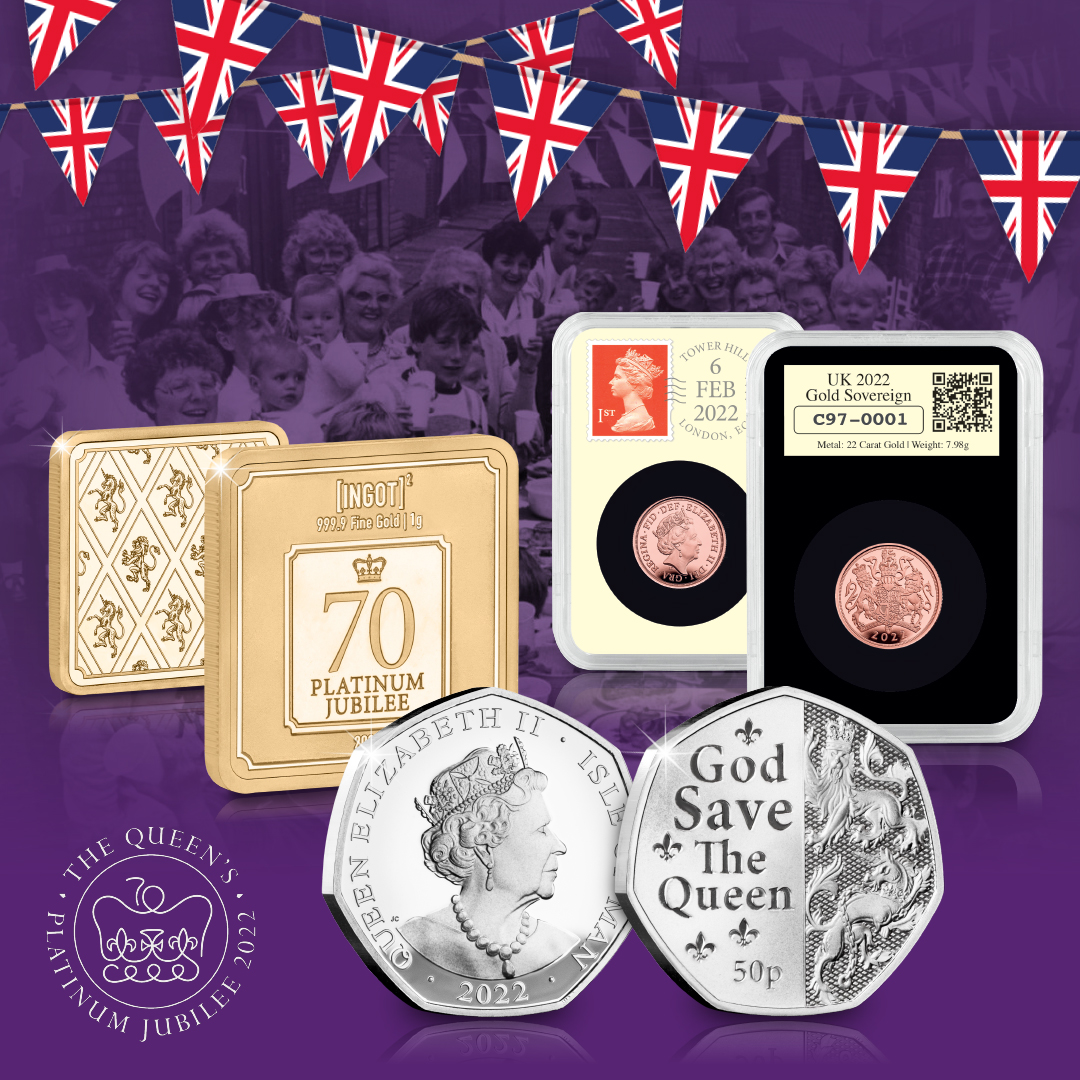